Now that the North American garden that bloomed so colourfully in the British Museum forecourt over the summer is being dismantled at the end of the season, the plants are finding their way to Brunswick Square. The central bed, which has needed a facelift for a while, is being replenished with these colourful and drought-resistant perennials -though drought resistance hasn’t been at the front of our minds in recent months, it is an important characteristic in many London urban summers.  Hopefully they will provide the same show of colour in the square as they did in the Museum forecourt  (see photos below).

Once this bed is completed, replanting of the long south border in the square will also take place over the winter. 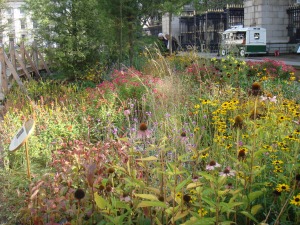 Flowers in the Museum grounds