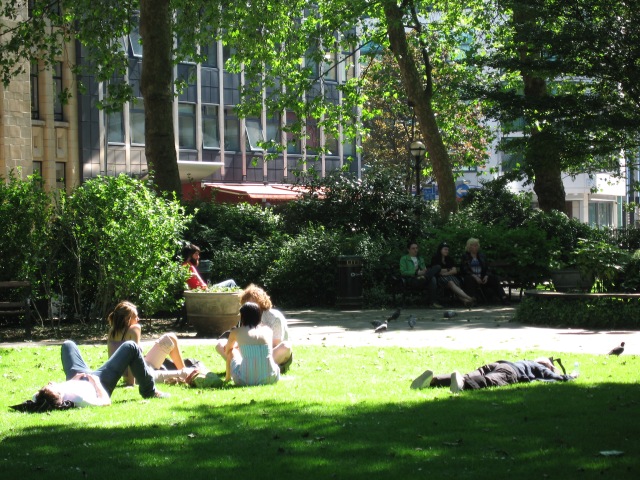 A welcome splash of green  (with a café) allowing the visitor to step aside for a while from the busy business and retail area of Holborn, Red Lion Square has a long history.

The fore-runner of Red Lion Square was Red Lion Fields named after the original Red Lyon Inn and Red Lion Street, both off High Holborn. The inn, established in the 16th century (rebuilt in 1899), was reputed to be the most important hostelry in Holborn where ‘In better weather patrons engaged in energetic, thirst-making sports in Red Lion Fields or just took their drinks outside. The lawyers and their students at nearby Gray’ s Inn were also in the habit of seeking their recreation in this open space to the west of them.’

In 1661, when the bodies of Oliver Cromwell, Henry Ireton, an English general in the army of Parliament during the English Civil War, and John Bradshaw, one of the judges who sentenced Charles I to death, were exhumed from Westminster Abbey their bodies were drawn on sledges to the Red Lyon Inn and spent the night there, hence to Tyburn, where they were to be beheaded. However, the story goes that alternative corpses were substituted and then Cromwell and co were buried by the Parliamentarians in Red Lion Fields with a rough and plain obelisk erected to mark the spot (removed in 1790).

Towards the end of the 17th century property development around the square took place, at first hotly contested by many, including nearby Gray’s Inn lawyers, who complained of their loss of ‘wholesome air’. However the houses in the new square seem to have been highly successful in attracting to them ‘men of quality’ such as the very same lawyers, as well as doctors and other professionals. The surveyor Edward Hatton, in 1708, described the Square as ‘a pleasant square of good buildings, between High Holborn south and the fields north’. Only the 18th century buildings on the south side remain. An anonymous observer, writing in 1720, remarked favourably ‘upon the rows of trees, gravel walks and grass plots in the square’, stating that they were ‘all neatly kept for the inhabitants to walk in’.

The fate of the Bloomsbury  squares has always gone up and down. In 1737, an Act was passed for beautifying Red Lyon Square ‘which had run much to decay’ and raising a levy on all the residents in order to have the square’s appearance improved. The square had become ‘a receptacle for rubbish, dirt and nastiness of all kinds and an encouragement to common beggars, vagabonds and other disorderly persons to resort thither for the exercise of their idle diversions and other unwarrantable purpose’. Around this time, or soon afterwards, railings were put up round the square and watch houses were built at each corner (removed in 1790).

Gradually the square became less fashionable and was regarded as gloomy and the ‘men of quality’ moved away. In the mid-19th century Dante Gabriel Rossetti lived in the square, at No. 17, and later Burne-Jones and William Morris lived in the same house, recorded on  a plaque.

It was laid out as a public garden in 1885 by Fanny Wilkinson, landscape gardener to the Metropolitan Public Gardens Association, and later passed to the London County Council, who maintained it as a pleasure ground.

In 1927, the South Place Ethical Society, now the Conway Hall Ethical Society, purchased the plot of 25 Red Lion Square. Conway Hall, as an educational charity, programs concerts, talks, theatre and exhibitions and has the largest collection of humanist works in the UK contained within its beautiful first floor art deco library.

In 1974 the square was the scenes of riots: On 15 June the National Front finished a march through London’s West End in Red Lion Square. The London Area Council for Liberation staged a counter demonstration march also ending in the square and fights broke out, ending with a student, Kevin Gateley, being killed.

In the garden is a bust of philosopher Bertrand Russell and a statue of anti-war activist Fenner Brockway. 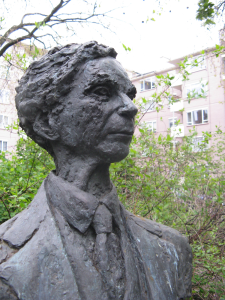 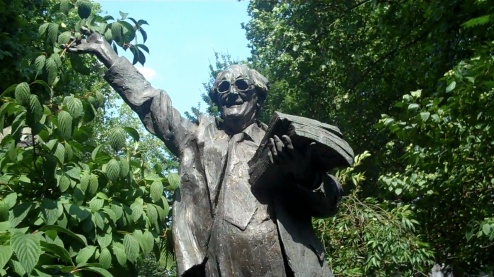 At one time a bronze statue of Pocahontas by David McFall (1956) was installed in the square, but was removed some time after 1981. A handkerchief tree was planted for the victims of the Lockerbie air disaster.

The square is maintained by Camden Council and is open during the hours of daylight.

The Friends of Red Lion Square can be contacted through their website.