Public parks have played a vital role during lockdown

As you will have seen in the news, and from the evidence of your own eyes in Bloomsbury, our green spaces are playing a hugely important role in contributing to people’s mental and physical health during the Covid-19 crisis. As Gardens Trust board member David Lambert says, the crisis has demonstrated unarguably just how important parks are, and it is to be hoped that the government will now recognise this by investing in parks as a public service that cannot rely on commercial income-generation to survive. We talked to park managers around the country, who are having to juggle not only the pressure of increased visitor numbers but also provide safe working conditions for their staff. Read more

Bloomsbury’s garden squares have played their part, as these photos taken in late May show. 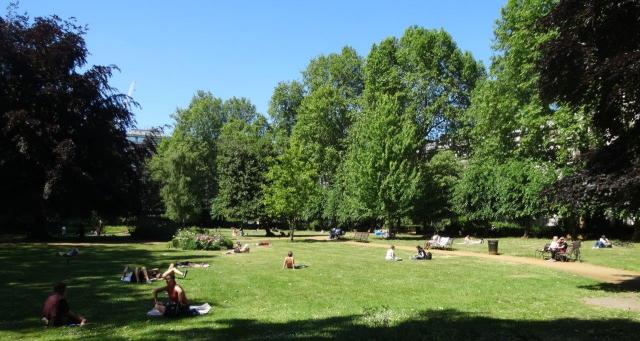 Gordon Square has reopened, along with the café, but there hasn’t been a mad rush to date, with the main clientele (students) having possibly returned home at the start of lockdown.

There hasn’t been a noticeable increase in numbers using local gardens since the ease down, although there is evidence of groups picnicking. The presence of bikes alongside these groups suggests they may be travelling distances to use the lovely spaces. There are  a lot more people on the streets to get safely past on the way to a green space.

There is less of a police presence generally now, although WC1 has been included in a 24 hour special ops area where the police clamped down on youths meeting up to have brawls.