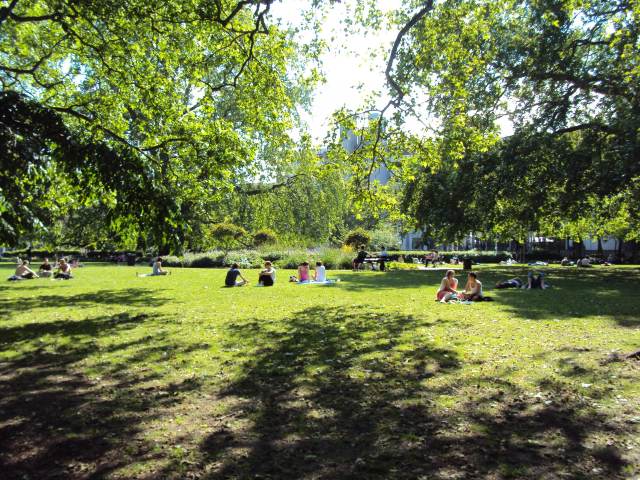 The origins of Brunswick Square date back to 1790 when the Governors of the cash-strapped Foundling Hospital for abandoned children lost their Government grant and decided to develop their estate. They commissioned the exceptional builder James Burton to create a garden surrounded on three sides by town houses, beginning with the south side in 1801. The square was named after the enigmatic Queen Caroline of Brunswick, wife of King George IV and the only British Queen to be tried for adultery (she won the case).

Brunswick Square is mentioned in Jane Austen’s novel Emma, where the heroine’s sister Isabella boasts that “our part of London is so very superior to most others…we are so very airy”, being right on the edge of the town in those days. To read an interesting article on ‘Emma and the children of Brunswick Square’ click here

The square was always very respectable if not fashionable, although the brief presence of the “Bloomsberries” in the early 20th century gave the square a bohemian cachet. Notable former residents include Virginia Woolf (nee Stephen), Adrian Stephen, Duncan Grant, Leonard Woolf, EM Forster, John Ruskin, John Leech, Michael Wishart and John Maynard Keynes. J.M. Barrie lived for a while in a house on the SW corner of the square (marked by a plaque on the building which replaced it) and wrote Peter Pan as flying up from the gardens to visit Wendy at one of its windows. This is recorded in an article by Rosemary Ashton in the London Gardener. To read the article,click here Peter Pan. He also left his royalties to nearby Great Ormond St Hospital for children.

Over the years all the original Georgian houses have been replaced by modern buildings, including two university buildings (the School of Pharmacy and International Hall), the cinema, apartments, shops and restaurants of the Brunswick centre and the Foundling Museum, with its close associations with Handel and Hogarth. A statue of Thomas Coram, the philanthropist who was instrumental in founding the hospital, stands outside the museum.

The Garden was extensively refurbished by Camden Council in 2002-3, including the restoration of traditional iron railings which were removed to be made into munitions to help the war effort. Among its many trees is a beautiful and venerable London plane tree which is thought to be the second oldest in London, and was declared one of the Great Trees of Britain in 2009.

See a slideshow of images from the garden in the Bloomin’ Bloomsbury collection.

Brunswick Square is maintained by Camden Council and is open to the public during daylight hours. The Friends of Brunswick Square are keen to promote bio-diversity and have persuaded Camden to install bird boxes, bat boxes and wildlife planting.

To find out more contact the Friends of Brunswick Square at bloomsburysquares@talktalk.net